Greetings from Castle Craig; we had quite a busy morning between visits from Historic Scotland (our wonderful co-funders!), Perth and Kinross Heritage Trust, and children from Dunning Primary School. The local interest in our work is exciting and it's great to get the chance to share our brand-new finds with the community.
After our visitors left, we were able to get back to excavating briefly before being interrupted by rainshowers. We took shelter in our storage tent and took the opportunity to celebrate Dr Ewan Campbell's birthday - he turned a very youthful 27 today - with some cake and chocolate biscuits.
We continued extending Trench 1 to the north to give us the opportunity to excavate deeper along the outer edge of the broch wall, and after lots of rock hauling we managed to reveal a strange gap in the stone low down in the wall. This may have served as a drain from the interior of the broch, possibly removing water and other undesirable material from ground floor. A small stone-lined posthole sitting atop the broch wall was also excavated, likely contemporary with the medieval palisaded enclosure and possibly part of a no-longer extant timber structure.
Trench 6 saw a lot of progress excavating the outer edge of the broch wall as well, with the discovery of some new contexts and a possible paved area just outside the wall to the north. A possible Roman potsherd was uncovered by Mackenzie in this area. Stacey and Alex were hard at work sampling contexts, filling out context sheets and making section drawings (a task which they were quite happy to find out will be taken over by Greer tomorrow).
Trench 8 was the site of some important planning today, as well as lots of photography and section drawing. Jules's section into a possible posthole outside the broch has led to its reinterpretation as a burning layer. Excavation continued on a large stone-packed posthole in the centre of the trench which likely relates to the medieval occupation of the site.
Further excavation in Trench 9 by Ewan, Tessa and Joss reached the bottom of the outer defensive wall, and the presence of burnt and compacted contexts beneath it will provide us with excellent material for dating the wall's construction. Excavation began on another stone-packed posthole just outside of the wall.
Looking forward to another exciting day tomorrow!

The Open Day began with busily preparing ourselves to welcome guests to ‘Heather’s Broch’. We were cleaning trenches, putting up signs and learning impressive broch facts to wow our visitors with. By 12 o’clock the site was looking ship shape and we were all excited to share our broch with the local community and those from further a field. The day was a complete success with a stampede of people making their way up the hill to Castle Craig. Tours were carried out by supervisors, students and volunteers and the majority of guests commented on how impressive and exciting the broch is. Not only was the Open Day an opportunity for the visitors to learn about Castle Craig but it was also a learning curve for the archaeologists. We were able to understand more about the broch itself and hear interpretations from the guests which helped shed a new light on various aspects of the site. Although the majority of the day was focused on the Open Day it was still a working day and some discoveries were made to help us understand the mysteries. Another defensive rampart revealed itself on the north face of the hill and more of the broch wall was uncovered. Finds from the day included animal teeth and burnt animal bone. Overall the Open Day was a success as Castle Craig got the attention it deserved and the public had a good day out.

Stacey
Posted by SERFer at 14:00 No comments:

Hi its’ Daniel from Leadketty here. I’ll be giving you an account of the days’ work at Trench Three, which I am trainee supervising.
Work has been progressing after the couple of days' bad weather, and we had a full trench of people digging, planning and surveying. We had Alan, Martin, Sabine, Sarah and Vesa in the postholes of the avenue and palisaded enclosure and some volunteers uncovering the Eastern most palisade post holes, so the pre excavation drawing could be completed. This was a great find by Lawrence and his two sons, as this has allowed for the missing postholes of the palisade to be projected as, our hypothesis that the palisade post holes in this area of the trench are as close to 2.6 meters in distance apart. Hopefully we can find a couple more in the horrible silty layer of soil that has washed through the middle of the trench.
Myself and Aoife were supervising the students and helping in the recording process. Also, pre-ex planning a particularly awkward area of the trench, with some hard to see linear features and some shattered ploughed stone, which has been very very very tentatively spoken of as a possible ploughed through cairn!
However the most exciting news on site was the discovery of Grooved Ware, a type of Neolithic pottery, in the avenue postholes, which called for the Groovy Ware dance to be enacted! In terms of the wider research aims of the project this is very significant, as in the previous palisaded enclosure excavations at Forteviot in 2010, no pottery whatsoever was in the avenue or palisaded postholes, which suggests that something very different was going on in the structure at Leadketty.
All in all, this was a fantastic day on site, with some great laughs and ridiculous four seasons in one day Scottish weather. Tonight is the Archaeology Quiz, compared by the venerable Jeremy Hugget, which should provide a couple of hilarious moments. Hope to see you at the open day on Sunday at Dunning, where we’ll have some of the amazing finds from not only Leadketty but the broch site at Castle Craig as well!! What a treat. 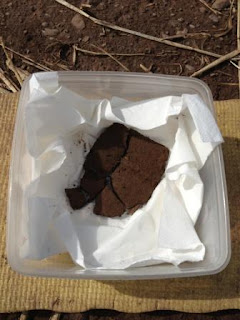 Alex from Aberdeen Uni here with today’s update from Castle Craig! To start with I must say that it feels insane that we have now been here 16 days and has less than a week to go!  Will really miss everyone once this is over! Especially my trench buddies. Never thought I could get this attached to a trench haha! Also must add that never been so proud to present something as on Sunday during the open day! Trench 6 <3 span="span">

The weather today really couldn’t make up its mind, sunny really warm one minute and then pouring down with rain the next! Despite this it has been a very nice and calm day! Planning and section drawing for all the trenches has taken up most of the day! Must admit that to start with I was not really enjoying drawing, especially as the rain constantly destroyed it! But as the day went on and the weather got better I actually learned some tricks and got quite alright at it!

Oh and more evidence for medieval occupation was also uncovered in the form of pottery! Tomorrow we will have students from the local schools coming to view the site and we will guide them and show them how we do things! All really exciting!
Posted by SERFer at 20:51 No comments: