An update from the henge trench with Gordy (who has been there from the start)...

Yipee! – after 10 days in a large hole I finally got a gravelly bottom, and Dene relented and moved me onto something else. Sixteen days in and life on the dig is starting to resemble Groundhog Day; wake up in the morning, speak to the same people, go to the same place, do the same thing… Agggghhhh! But one thing has changed – our shiny new dining hall where everyone can spread out and try to sit as far away from each other as physical possible; it is funny how people separate into their wee cliques and seem reluctant to move out of their comfort zones – maybe we should play musical chairs.

The hot chocolate machine is not working, which does seem to be the one thing dominating my mind right now, and the ‘hot chocolate flavour’ drink from the coffee machine is like drinking a cup of mud with a hint of foam.

The Henge was a buzz of activity as usual today with the Funk Brothers enjoying a day of destruction in the area around the cist – they even managed a late duet of “clean up your spoil”, though they seem to have forgotten the lyrics after that. It was noted that Dr B is not happy about the lengthy commute from the trench to the toilet area, and has promised to have them located nearer next year. It was also pointed out that perhaps the distance is not a bad thing after all, as the smell has real possibilities of reaching the gods – perhaps it is an authentic Neolithic smell to add to the phenomenological experience.

The ladle is in demand today as multiple deep holes appear across the site – maybe the budget will stretch to 2 next year?

I had a good day at the Pictish cemetery today where I continued to excavate a section through the central burial of the round barrow. At one point I thought we were going to get rained off as some ominous rain clouds were coming our way but luckily they were only teasing. However if the wind continues I don’t think the tent is going to last much longer 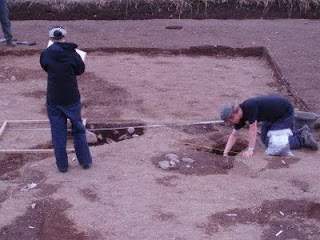 as two big holes have appeared in it. At least it’s still standing as opposed to the henge tent. Anyway back to the burial. It’s been pretty difficult to work out the different contexts as animals have had their fun burrowing through it. In fact they’ve had their fun through out the whole barrow. There were two nice rectangular shaped charcoal deposits approx 5cm by 10cm, one in a corner of the burial and one along the side (possible remnants of burning stakes? who knows). By the end of the day I reached a large stony/pebbly layer, don’t think it’s the bottom yet so I look forward to digging that tomorrow.