Today the news of the cist burial has been taken up by the press... look for it in the Scottish newspapers.

On site the day started with further drawing and recording at both Forteviot trenches, but soon the heavens opened and the rain fell - which slowed work. Although digging was stopped at the henge site for the afternoon, excavation continued on the cemetery site.

Sara recounts her experience at the Forteviot Pictish cemetery site:

Excavations at the cemetery site are well underway by this point in the field-school and many features were being excavated including; postholes, ditch features and what are thought to be Pictish graves surrounding a barrow feature. The weather was quite horrific and the area in front of the spoil heap started to resemble a swamp; however, we donned our waterproofs and kept working. With work making steady progress, I spent the majority of the morning setting up the total station, taking levels for some section drawings and retrieved the co-ordinate points for specific small finds; later planning an obscure gravel patch which had become apparent in the west of the site. Having planned the potential feature, the afternoon was spent defining the edges and trying to understand what could have created the strange L-shaped patch which showed potential to be quite deep. As soon as the gravel fill started to be taken out; about 9 million frogs appeared and so several people were recruited for ‘frog rescue 09’.

It became apparent that the feature was probably the result of a large animal burrow and that the gravel fill was the natural that underlay the silt. However, towards the end of the day, charcoal began to appear in the silty layer, which underlay some of the gravel which confused everybody and remains a mystery. As mentioned, the spoil heap did not fare well when the floods came and so the very last part of the day today saw myself and another giving it a good tidy. 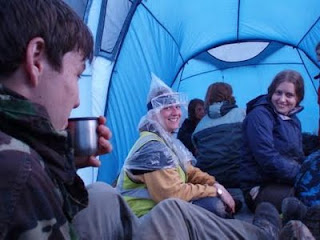