Forteviot
Trench 5
Hey, my name is Chelsea and I have been working on trench 5A (the sexy trench). Today it was pretty sunny, so working was rather easy, for once. In the morning I finished trowelling one of the inner ditch terminals of the palisaded enclosure. Once this was done I took photographs and drew a section drawing. After this I was asked to start trowelling in one of the sections of the triple cist which was really exciting. I had found large lumps of quartz and a small bone fragment. I was told that one of the cists from last year contained a lot of quartz too, and this also had a dagger inside, so things are looking very promising. The section that Heather had excavated had a body stain which may be the bent leg or elbow of the person who was buried here. Hopefully, we will find some other treasure shortly. While excavating, all the soil went into sample bags – I feel sorry for Gert as he has to sample them all! Today a glass bead was also found. Ewan said that it is most probably Norse, however, since it was found on the spoil heap we do not know where it came from. That’s all the news from our trench today. 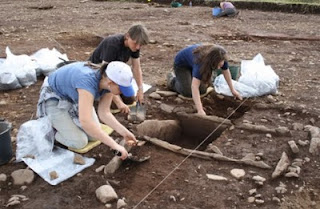 Trench 7
Work resumed on trench seven following the festivities of our only day off from the relentless onslaught of archaeological exhilaration. Last week culminated on Sunday with the annual open day and barbecue at Forteviot town hall and let it be known that a good time was had by all with an excess of sun and fizzy pop providing the fuel for much banter.
Yet again I found myself slowly moving backwards through time. From my first week risking the curse of the Pictish square barrows, and the mystery lung disorder it brought, to a couple of action packed days at the hillfort. It was there that I had the delightful task of topographic surveying through some pounding gorse and bramble bushes and excavating the bottom layer of the main ramparts of the central fort. Most excellent.
After moving from the Pictish period in the historic era to the probable Iron Age fort at Law of Dumbuils today I moved back a few thousand years into trench seven, and quickly found myself knee deep in the Neolithic with my very own post hole.
I would just like to take an aside to mention the sheer scale of the palisaded enclosure, which has incited the full wrath of my archaeological imagination. It is easy to lose sight of the bigger picture when confronted with an amorphous soily blob. Trying to untangle the pedantry of pedology or the confusion of corresponding contexts often obscures the ultimate goal of the excavation process, which is to enlighten us on the purpose and process of creation of structures and monuments that have been recalaimed by the natural and fallen to attrition and decay.
Each post had a probable width of half a metre, and stood anywhere from five to fifteen metres, driven into the ground by hand to a depth of upto two metres. The fact hundreds of these posts were arranged to form a vast palisaded enclosure thousands of years ago which stretched out two hundred and fifty square metres cannot fail to arouse some form of curiosity and awe in the mind of the archaeologist, who granted are a special breed of people.
Anyway, the day progressed steadily as most features being dug were finished, the series of gigantic postholes bottoming out at approximately one and a half metres, which considering my own is less than a third of this means I have my work cut out to finish it in time. It would appear that we have a variety of possible interpretations for the birth and death of each of the palisade post holes. One appears to have been burnt in situ, another rotted away and one even forcibly ripped out. Hopefully as work reaches its finishing stages in the next few days we can edge ever closer to an understanding of this awe inspiring monument and the people who built it.
Lewis Prentice