Appologies for the lack of posts over the last few days...technical problems!

Hi my name is Ron and I’m in the Churchyard again today.  We began with a power-trowel of the spoil created by the rain and removing the bulk.  After some discussion (and a brief interruption to go move some heavy paving stones over by the church) it was decided that the second half of the trench would be opened after tea-break.  Removing the soil from the rest of the trench took the rest of the day, and it was fairly arduous, but we finished in the end. I'm rather proud of how much soil we shifted in the course of only a few hours. Tomorrow, we will give it a light trowel and hopefully the features we were expecting to find ('s Ditch, and a few other places that seem to be sort of regular cuts) will be there. 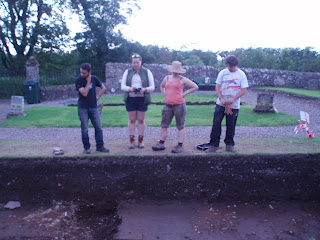 Pondering the 'Big Trench'
Posted by SERFer at 09:30