For the first time during the SERF project began one week ago, the skies were cast over with grey clouds when we arrived at the foot of Castle Craig. The wind was crisp and no one had to slather on sun cream before “digging in”.

At Trench Nine, the wonder Dr. Tessa Poller joined the usual four workers and, immediately, finds of all sorts began popping up. Beginning with some disintegrating bone and the enamel tooth caps from a pig, the finds began growing more and more interesting. There were a number of bronze fragments, folded, and parts used for casting. A small piece of silver was found and a Roman coin, barely recognizable from the small stone chips. Some lead weights were also found in
Trench Nine. Finally, we found some slag, changing the hypothesis that the walls we have found in the trench were from the guardhouse to a possible work area for metal workings.

“On top”, the team found the inner and outer walls of the broch which they celebrated with a ritual cheer. The broch floor has also been completely revealed in Trench One.

The day ended with the teams from all the sites of SERF field school having a tour of the work done at each site. Everyone was appropriately impressed with Castle Craig. 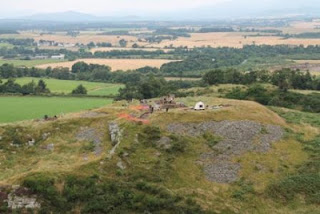