I’m Greer, a nineteen year-old archaeology student from Glasgow University. I have loved being outdoors and looking at really old stuff for as long as I remember. And that’s what I’ve been doing today. I’m working in trench 1 of the Castle Craig excavation, an archaeological project which is part of SERF project, and which intends to assess the suitability of undertaking a total excavation of the site. So far this site is known to contain the remains of an Iron Age  broch, but also a later fortification around the edge of the hill thought to date from the twelfth century.
In trench 1, we finally reached the floor in the inside of the broch, thus completing a job that has occupied us since the beginning of the week. Reaching the floor of trench 1 was the highlight of my day but not our only accomplishment. We also extended the southern and western edges of our trench as a health and safety measure, because the previous edges were highly unstable and we needed to remove some of the weight of stones and earth from the top of them. These sides of the trench now have a stepped edge, which facilitates access and prevents any large stones falling on the heads of unfortunate diggers. We ended the day with new, safer edges of our trench and were finally able to lift the tarpaulin and contemplate the entirety of the bottom of the trench, which consists of the interior floor of the broch.
In the other areas of the excavation, progress was also made. Trench 9, on the southern side of the hill, extended their trench edges as well and the diggers there were able to conclude that the stones revealed over the last couple of days were indeed part of a wall. Trench 9 also revealed some interesting small finds, including a piece of Roman glass and a Roman melon bead. In Trench 6 the broch wall continued to be exposed, and half an iron knife was found next to one of the wall stones. Trench 8 continues to be a confusing jumble of loose stone and rubble, but today was drawn carefully by the people there, hopefully introducing some sanity into the madness.
Once in a while, I come to the end of a day and feel like I have finally finished a long, drawn-out job. Today was one of those days; after five days of mattocking, shovelling, bucket carrying, stone lifting and earth sieving, I came to the end of the road. I arrived at my destination. We reached the floor of the broch. From a wider perspective, the excavation at Castle Craig seems to be progressing happily and continues to challenge those involve with new questions every day. As structures are revealed and small finds appear amidst the dark earth, the mist is lifted and the picture clears every day. 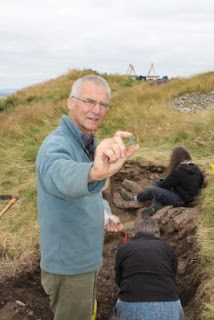 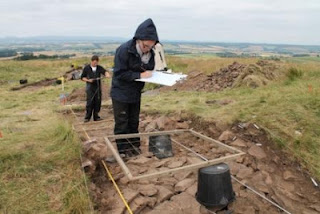