Since last year the SERF hillfort programme has been running its excavations out of the regular field school schedule.  This year we decided that we would do our hillfort excavation around Easter time.  Furthermore we decided that it was time to tackle the biggest and most complex hillfort in our study area, Castle Law Forgandenny.  Our plan for survey and excavation was to establish a chronology of different possible phases of this fort.  When we conducted the geophysical survey in February it was surprisingly sunny and warm most days!


Alas, winter came back with a vengence in March.  On Monday the 25th of March, undaunted by the snow and wind, a team of intrepid archaeologists persevered with the excavations.  First we had to find the location of one of the trenches first by clearing the snow.  The trench was positioned to explore a possible hut platform and part of a bank.

Luckily the ground was not too frozen to start detufing... 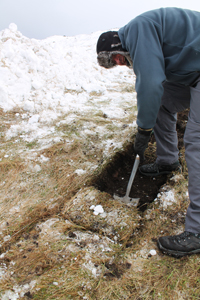 We made great progress and by the end of the day we had most of the trench deturfed.

The following days we concentrated our efforts on the one trench.  Between the showers of snow and hail the courageous crew continued to remove the topsoil.

As the week carried on the weather seemed to improve; there were fewer snow showers and even the sun would come out (Hoorah!).   Clearing of the topsoil within the trench continued and stones began to appear, some of which seem to form part of a circle.  Near the end of a days work, in the low sun light (or as Cathy MacIver aptly calls 'The Light of Discovery') a pecked stone object was spotted. 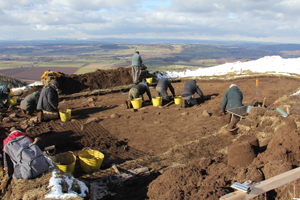 By the end of the week the trench it was ready to be drawn, which was a task taken up by Kenny and Jennifer. 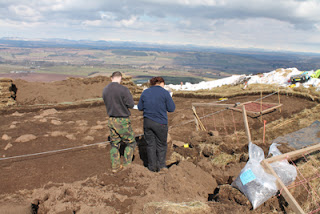 Meanwhile...Cathy and Adrian started to tackle there trench across the stone walls on the summit of the hill.  The trench would also explore some of Edwin Bell's excavation trenches, which were dug in 1892 but were not completely backfilled. 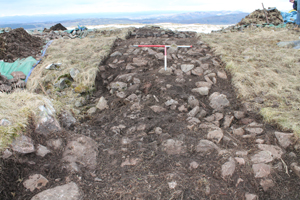 Hopefully the weather will continue to improve over the remaining couple of weeks of the excavation and we will make great progress.  We will keep you posted of our news.

We would like to thank the Dupplin Estate,Michael Blanche, and Historic Scotland for allowing us to conduct our investigations.