Big Dig Update Friday 4th July
Today we started in our final two trenches.  Jan and Paddy started a trench on Croft Avenue at Mrs Stewart's house.  So far we are not that deep down in this trench but we've found some burnt flint which may have been brought in with lime soil fertilizer when this area was agricultural land.  We are coming back tomorrow to see what else we can find!

We also started in Mrs Robertson's garden on Croft Place.  Both of these trenches look like they are within the Roman temporary camp boundary so you never know what we might find.  Lisa whose garden we were digging in yesterday came back for more archaeology!  I think she's got the bug!

Yesterday we continued in Trench 4 at Orchard House on Croft Avenue with volunteer Glenys and student Kate.  At the end of the day Glenys found some very large stones.  They are quite deep down and we are wondering if they are associated with some old farm buildings which used to be part of the Crofts farmstead.  We investigated further this morning & revealed a 1.5cm diameter copper pipe and found out that the very large stones were sitting on the natural subsoil so perhaps they were partially robbed out foundations.  It's very hard to tell with such key-hole surgery.  We think that when the new house was built in the 1990s in the old Orchard that quite a bit of landscaping was done as we found polystyrene quite deep down! 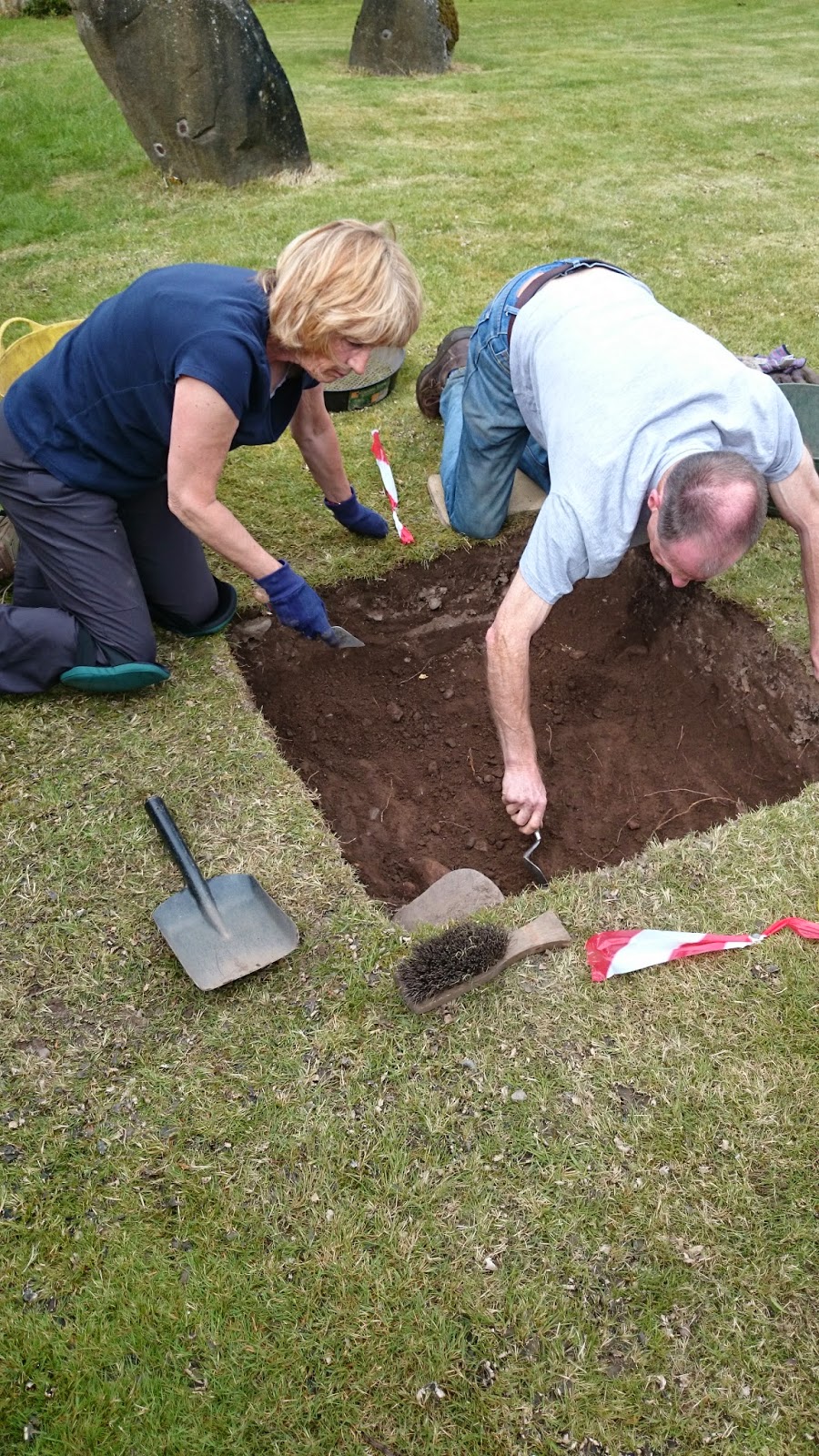 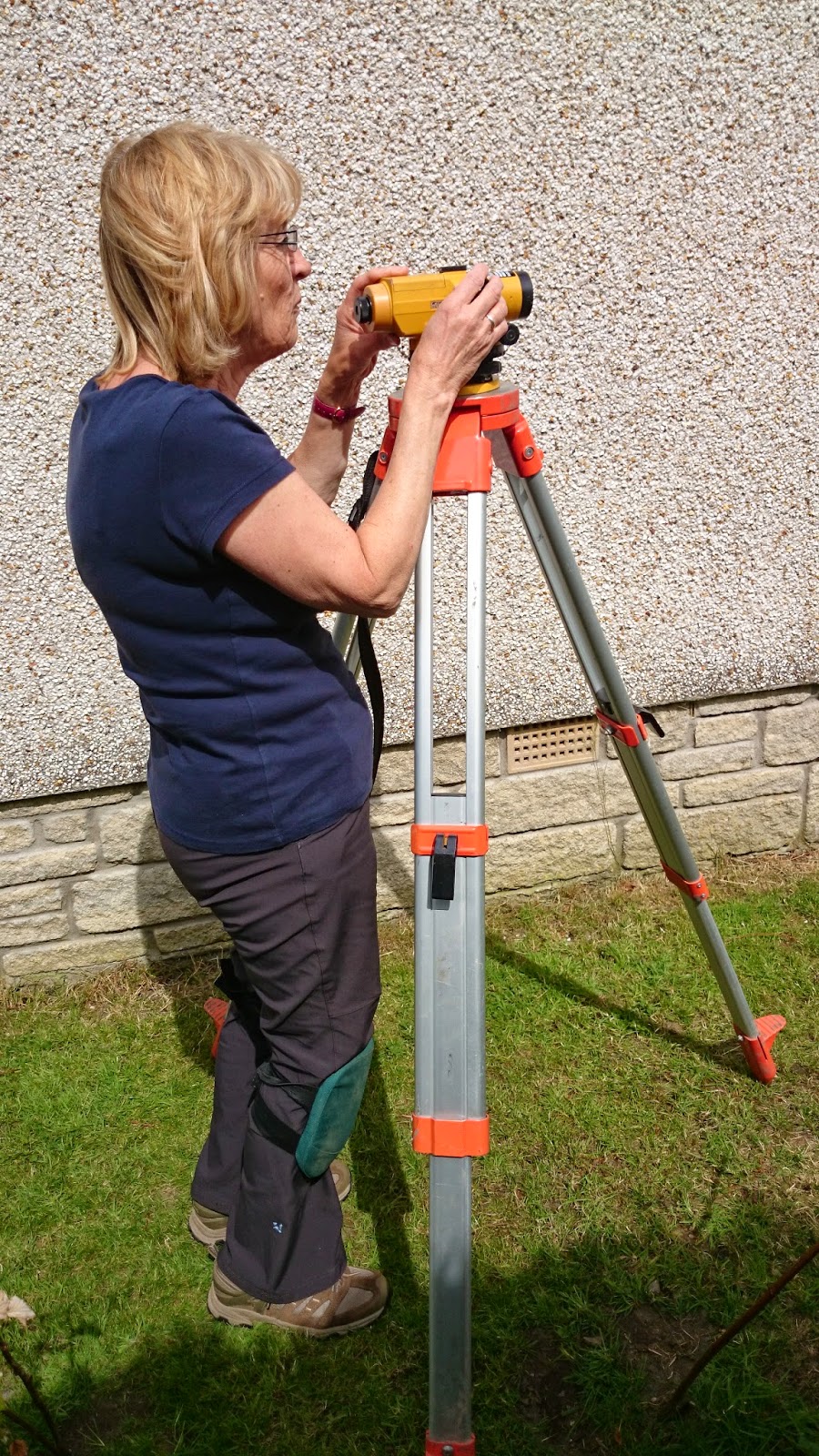 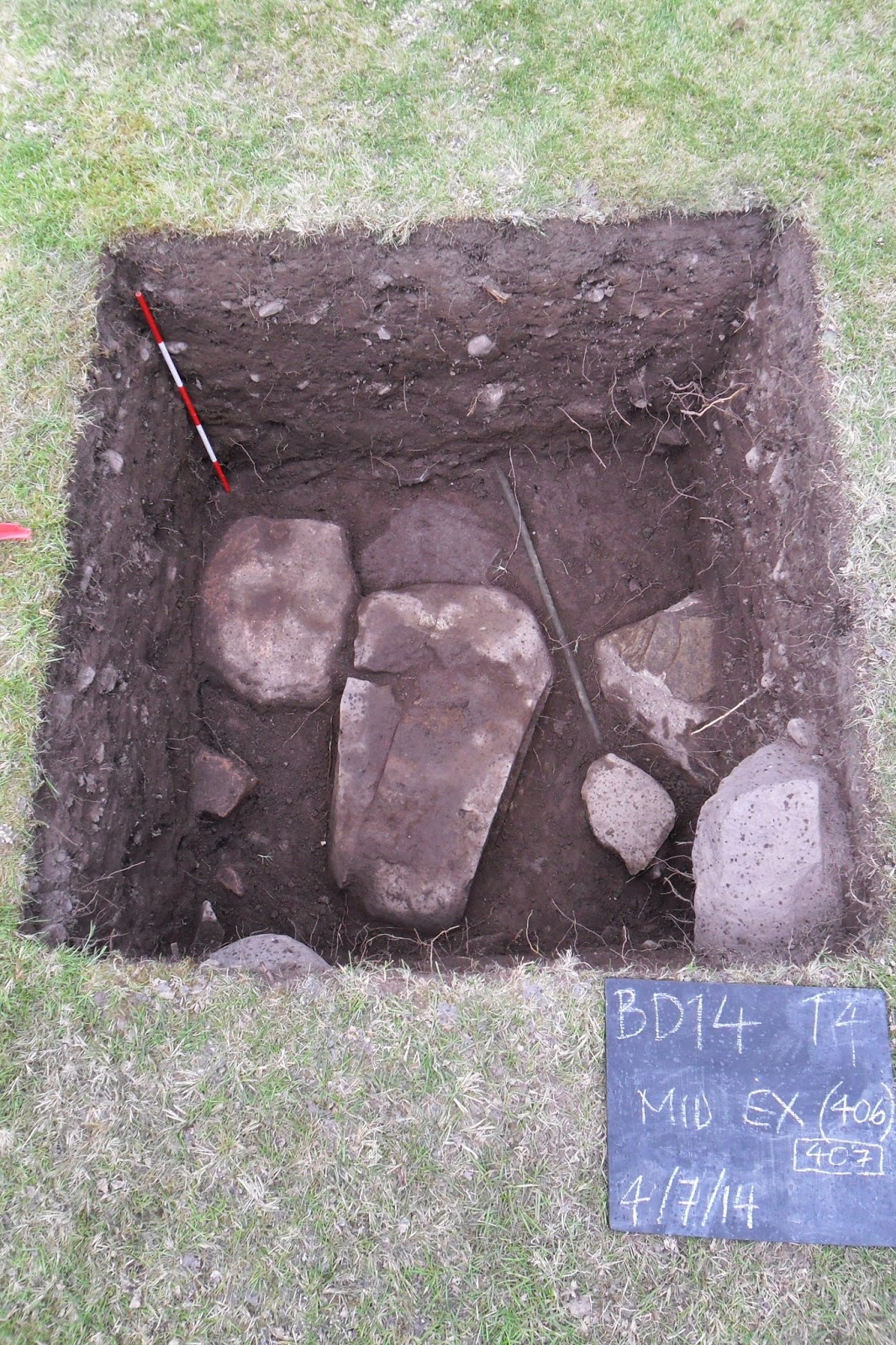 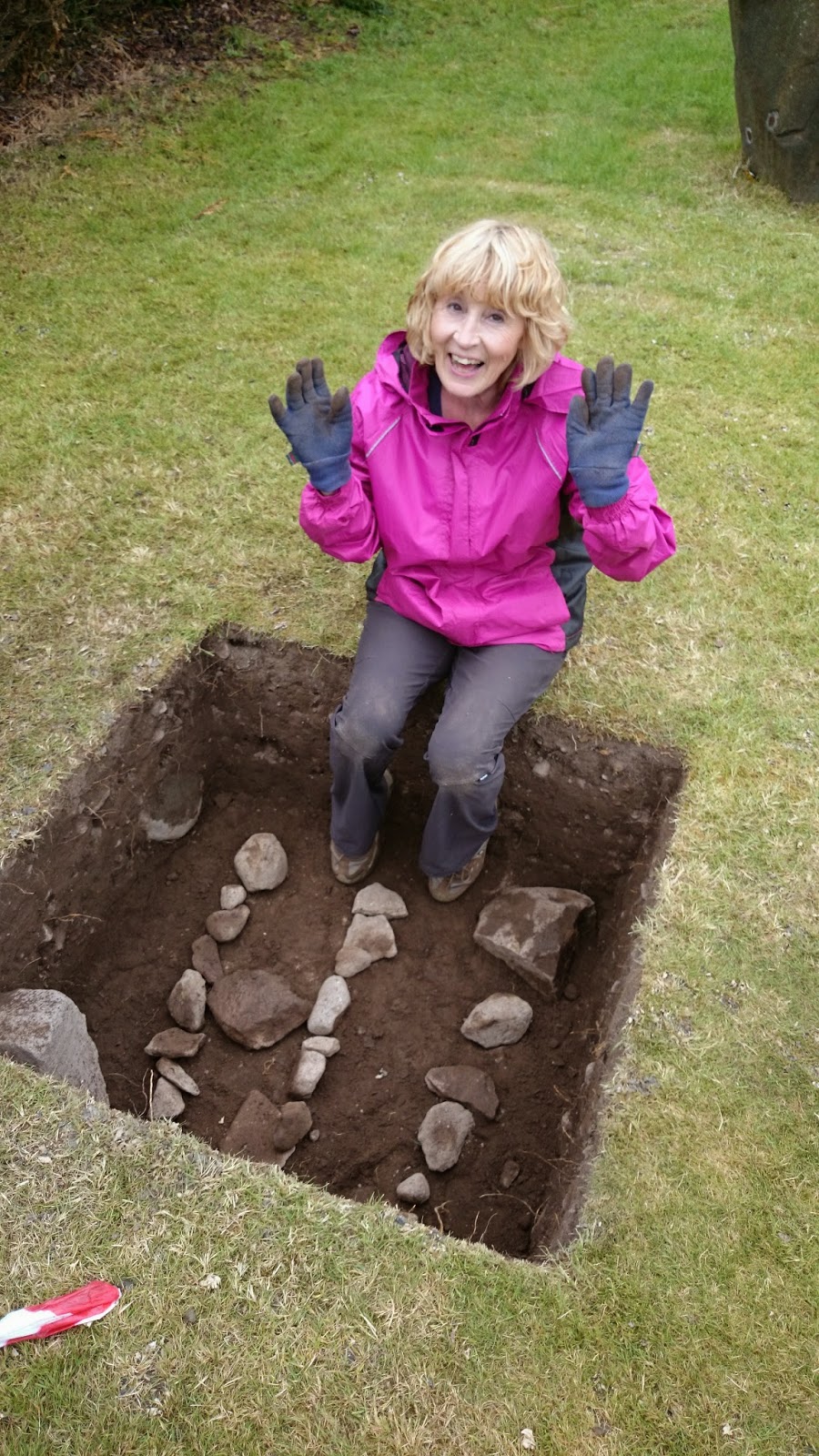 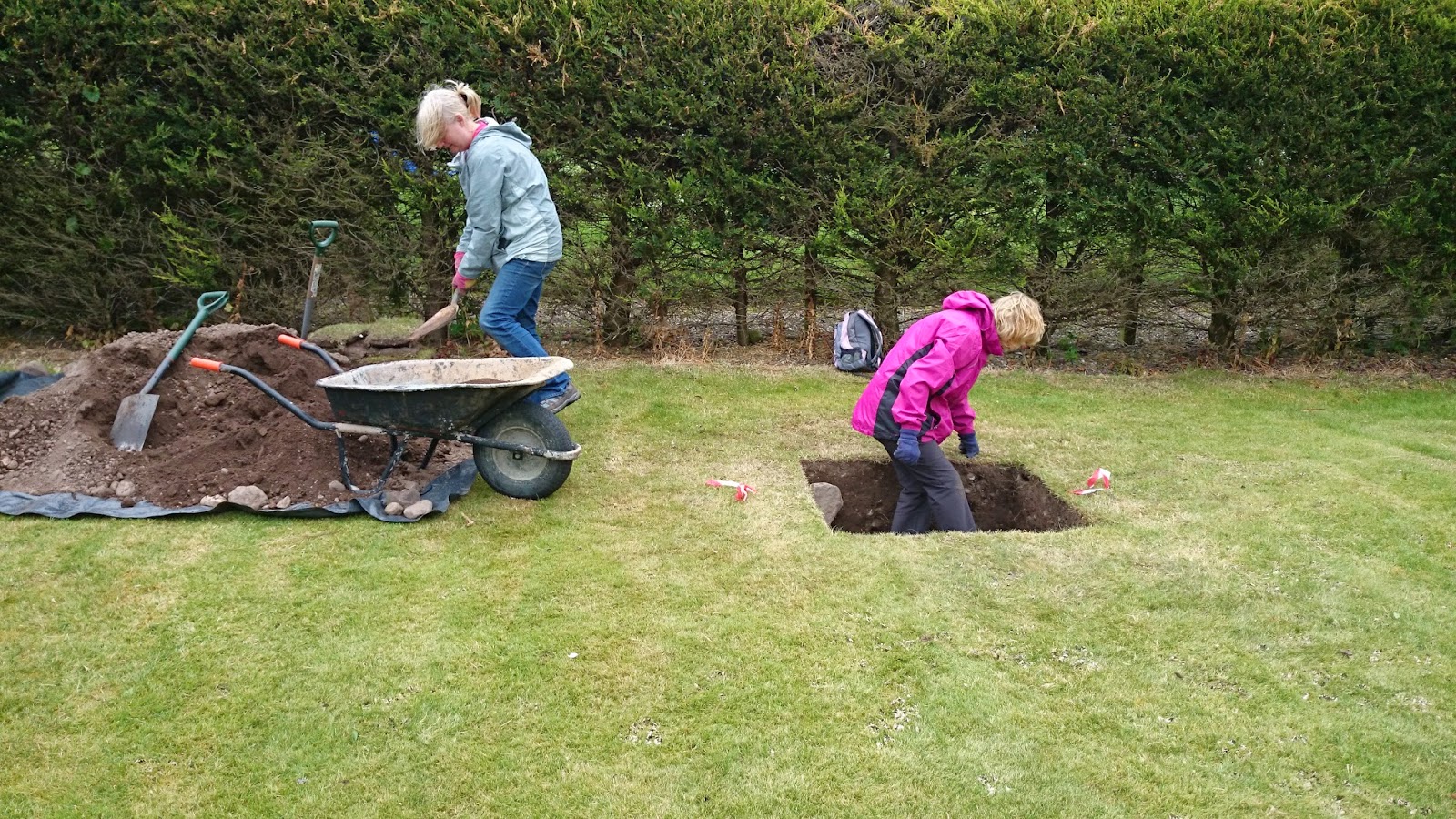 Glenys and Lisa backfilling at Croft Avenue on Friday morning

Today we started 2 new trenches - one at Oswald Villa B&B  which is in the old part of the village.  Lisa kindly let us lift her slabs and student Hollie supervised Lisa & her sister Lauren (pictured taking a pre-excavation photo!) to dig down carefully in 10cm spits.  They had lots of laughs but things got serious when they found something which they thought might be pottery.  On close inspection by Ewan Campbell it turns out it's medieval and one piece might even be 12th Century - the same date as St. Serfs Tower! 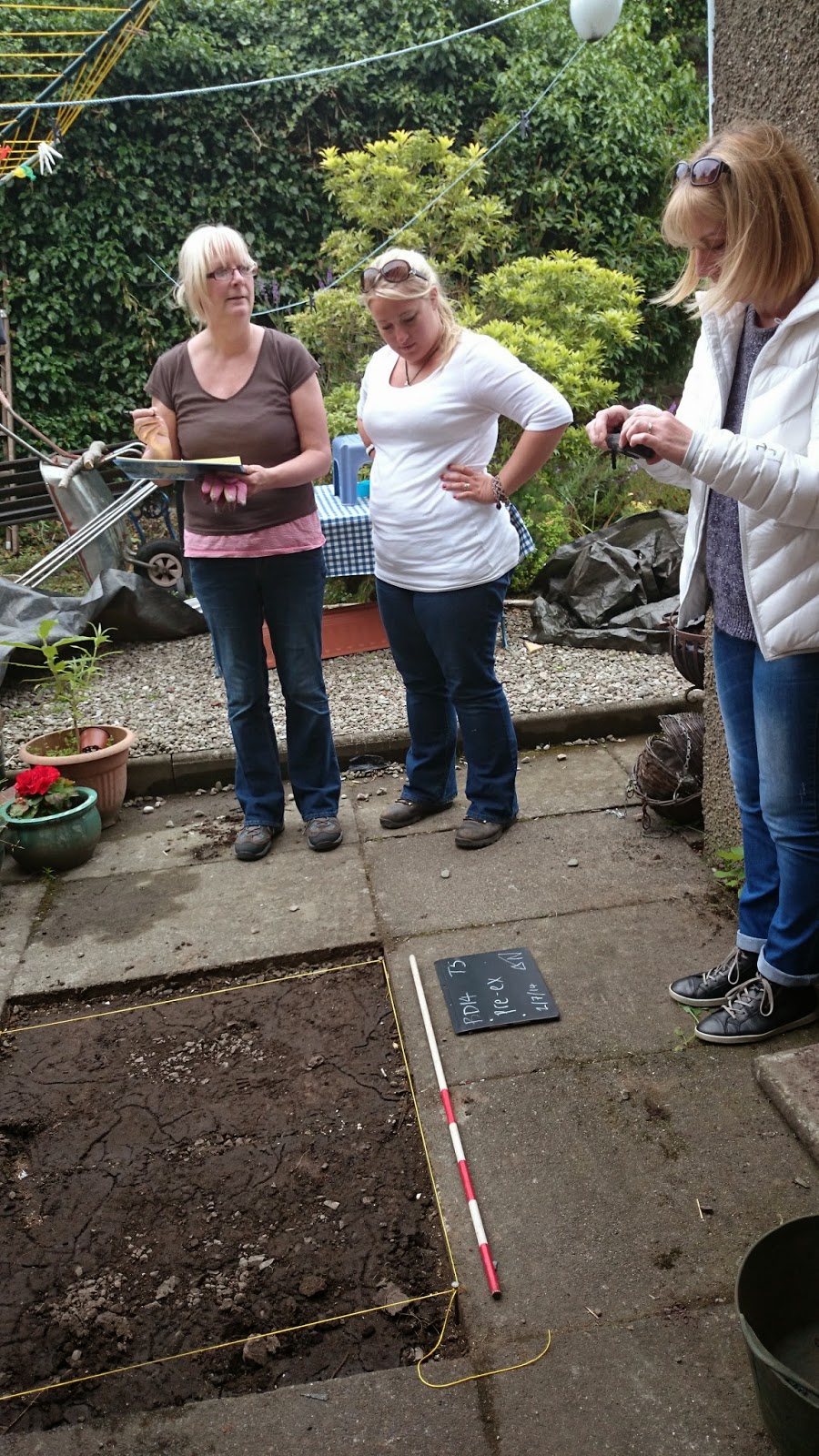 No de-turfing for these guys! 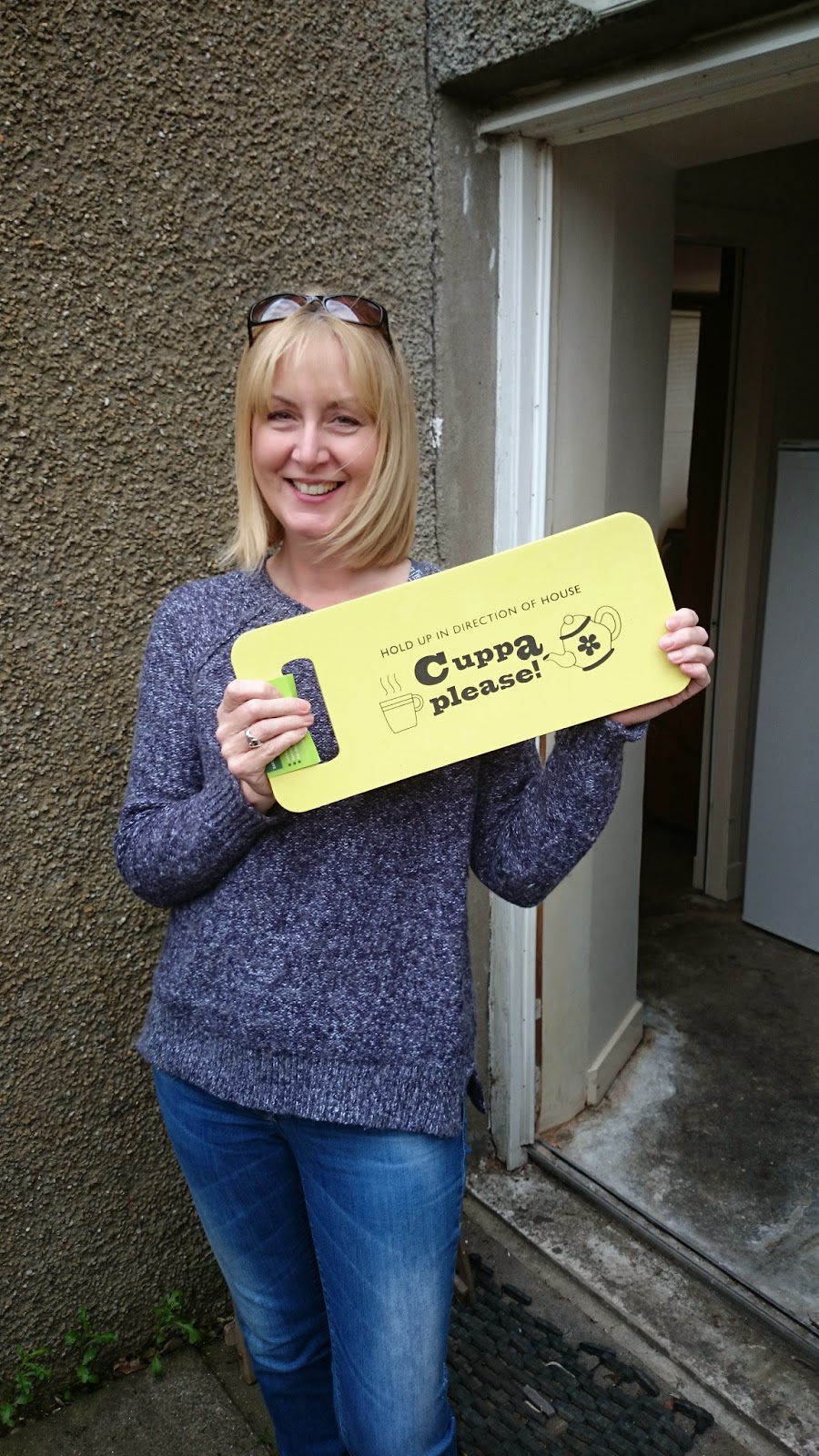 The benefits of community archaeology are that you can stop whenever you want for tea! 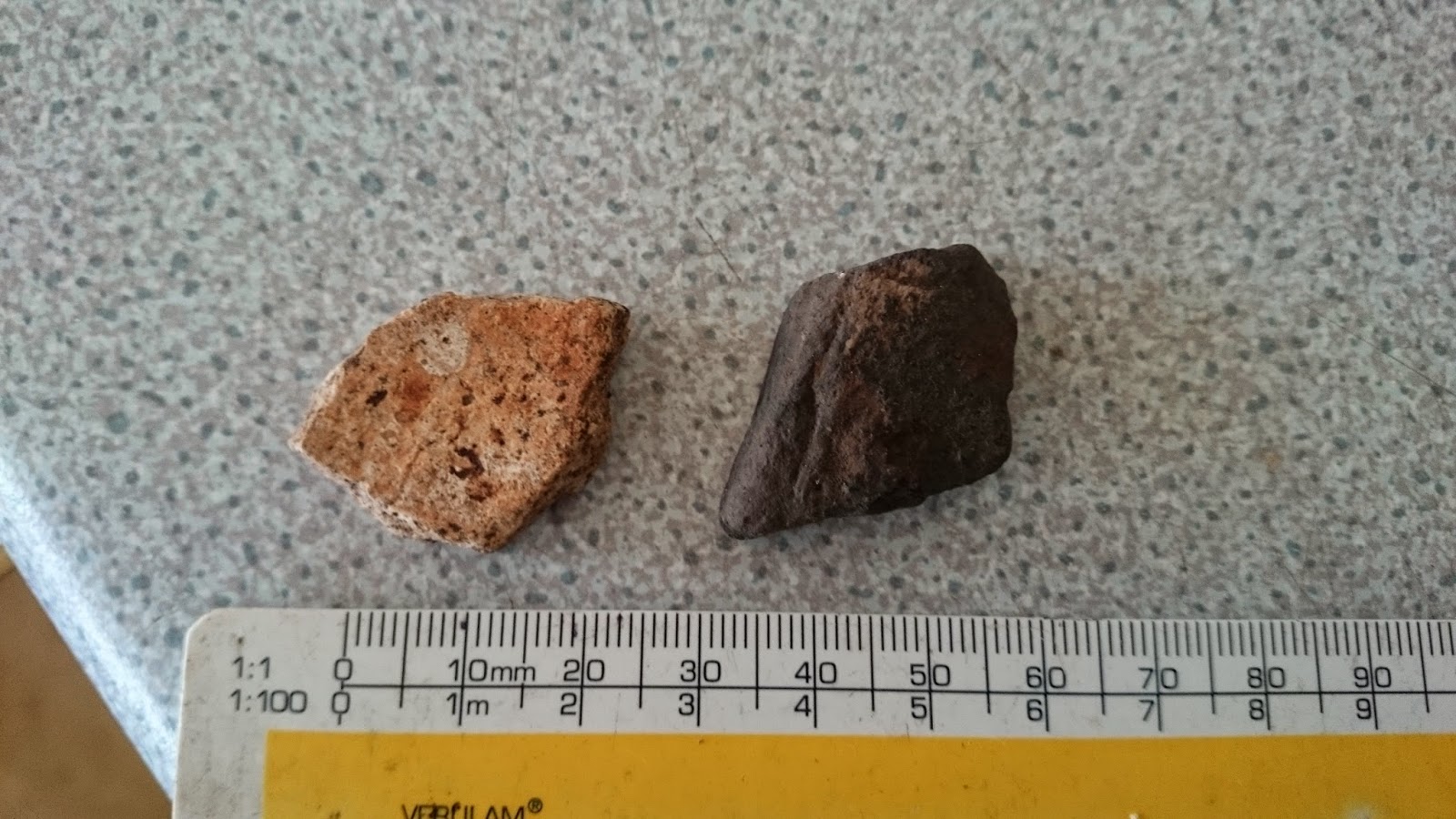 Medieval pottery from Trench 5
This is what Lisa had to say at the end of Day 1 in her garden: What a day! It was very different to my normal working day but it was exhilarating, extremely interesting and a great workout!! Can't wait to start again tomorrow !

We also started digging a trench on Croft Avenue where there used to be an Orchard and a farm called the Crofts.  The house is also within the boundary of the Roman temporary camp!   Home owner David was very busy so students Hollie and Jaquelene got stuck in starting to excavate.  No exciting finds as yet but watch this space!!

At the end of day 3 we filled in Trench 3 on the downslope from the Dunnock at Newton of Pitcairns.  As you can see we had to stop as we reached 1m in depth!  It was full of lots of post-medieval rubbish - lots of charcoal, clay pipe stems & bowls, pottery and more!  Thanks very much to David for letting us dig such a huge hole! 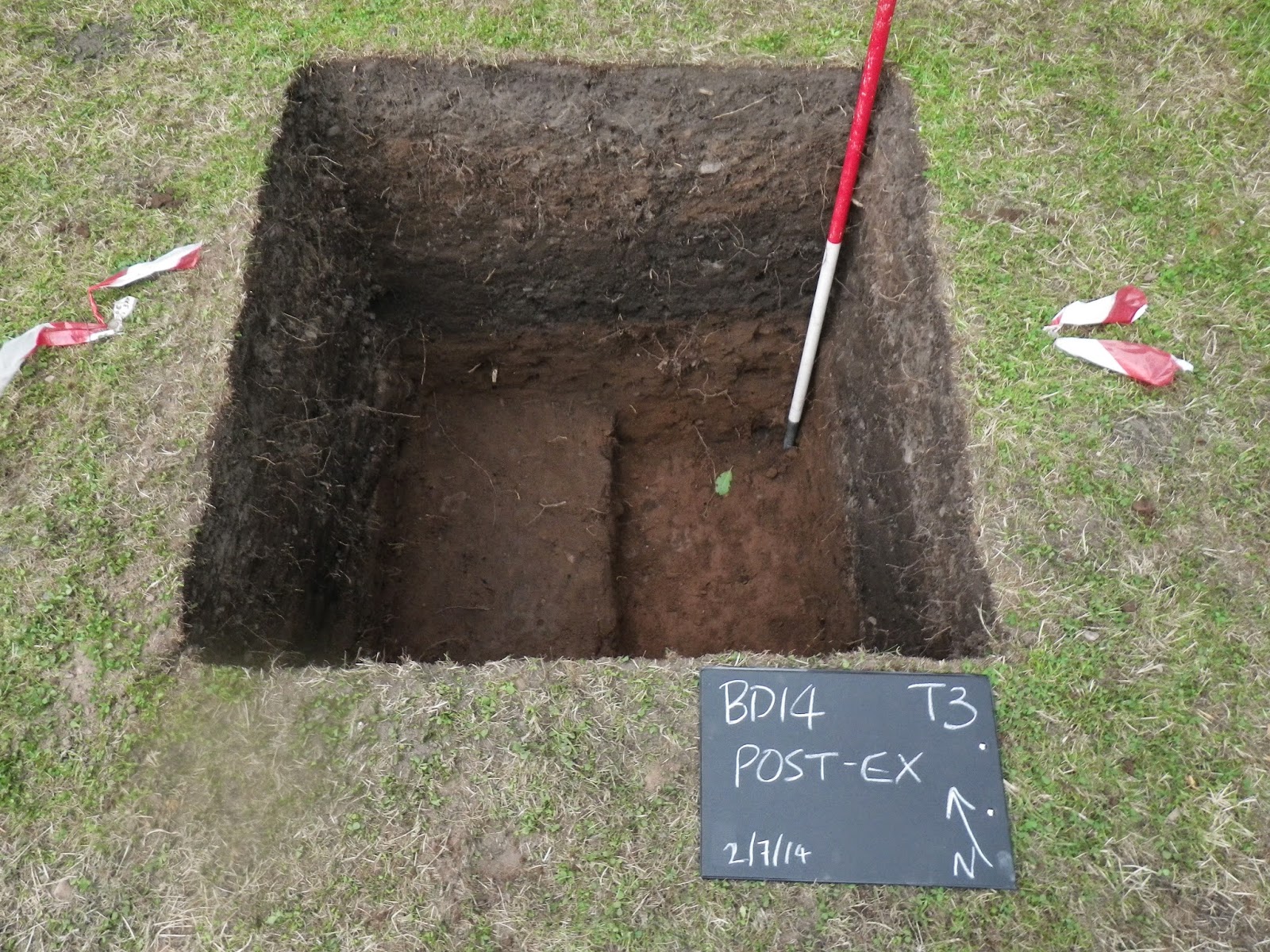 Look how deep they dug! 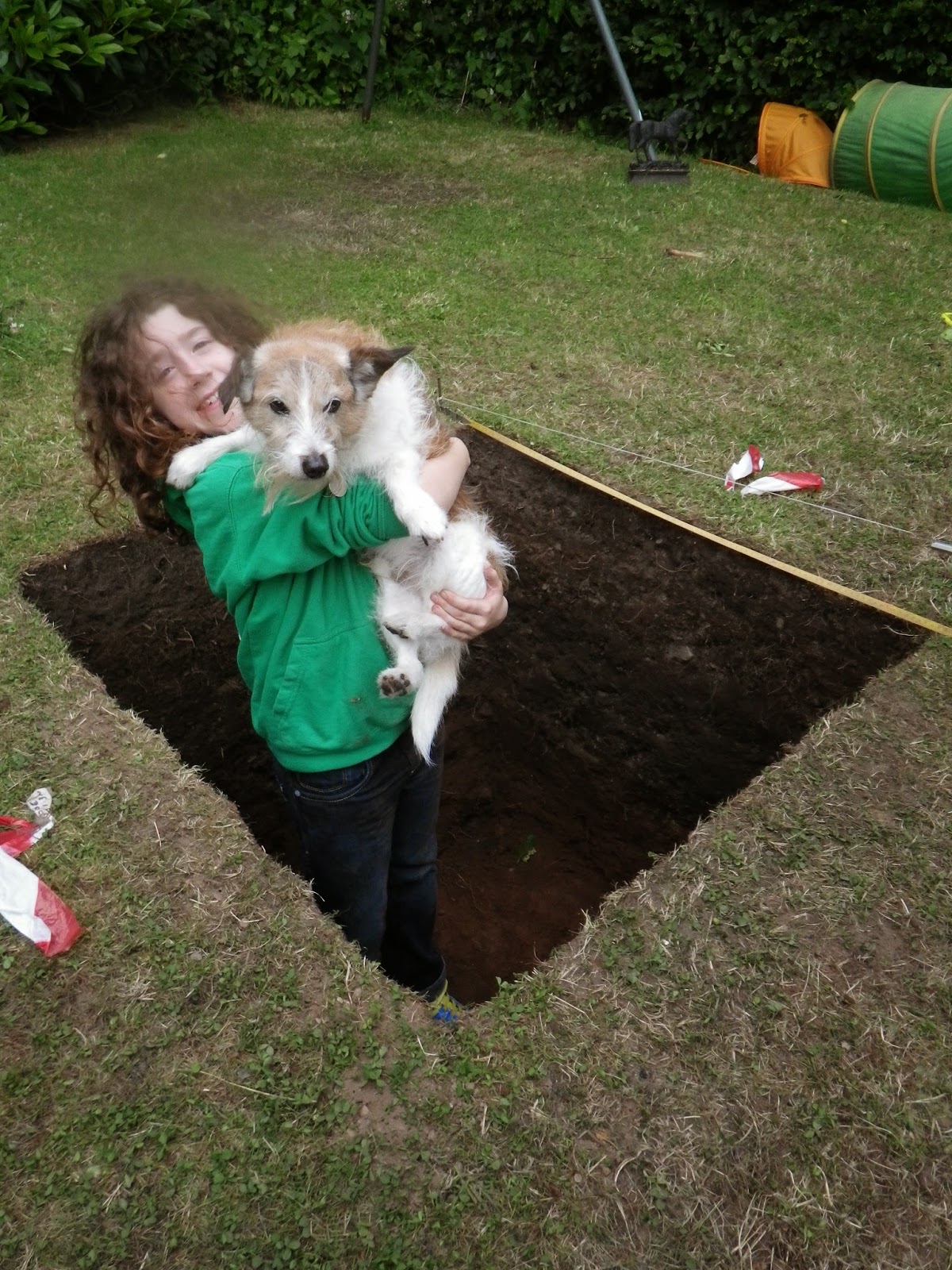 This is one of our star diggers from Trench Three on the downslope from the Dunnock Hillfort (Newton of Pitcairns).  The trench is now 0.6m deep and has yielded lots of clay pipe, 19th C pottery, lots of charcoal.  Looks like lots of rubbish has been dumped at the top of the garden over the years... Daisy & James have had great fun digging it.  Big thanks to Veronica and community volunteers Janet and Caitie for helping out here!

One of the finds from Trench 2 at the Crofts - where home owner Lorna and her daughter Fiona are helping to dig a test pit just between their house and the roman camp over the hedge.  Volunteer Sheena is also lending a hand.  Big thanks to students Cat and Ashley for sterling efforts too!

Today we found what appears to be natural subsoil with a post-hole cut into it.  It has coal chunks in so far, and may be a feature of Crofts farm which was here in the 19th C.  We also found this metal purse! 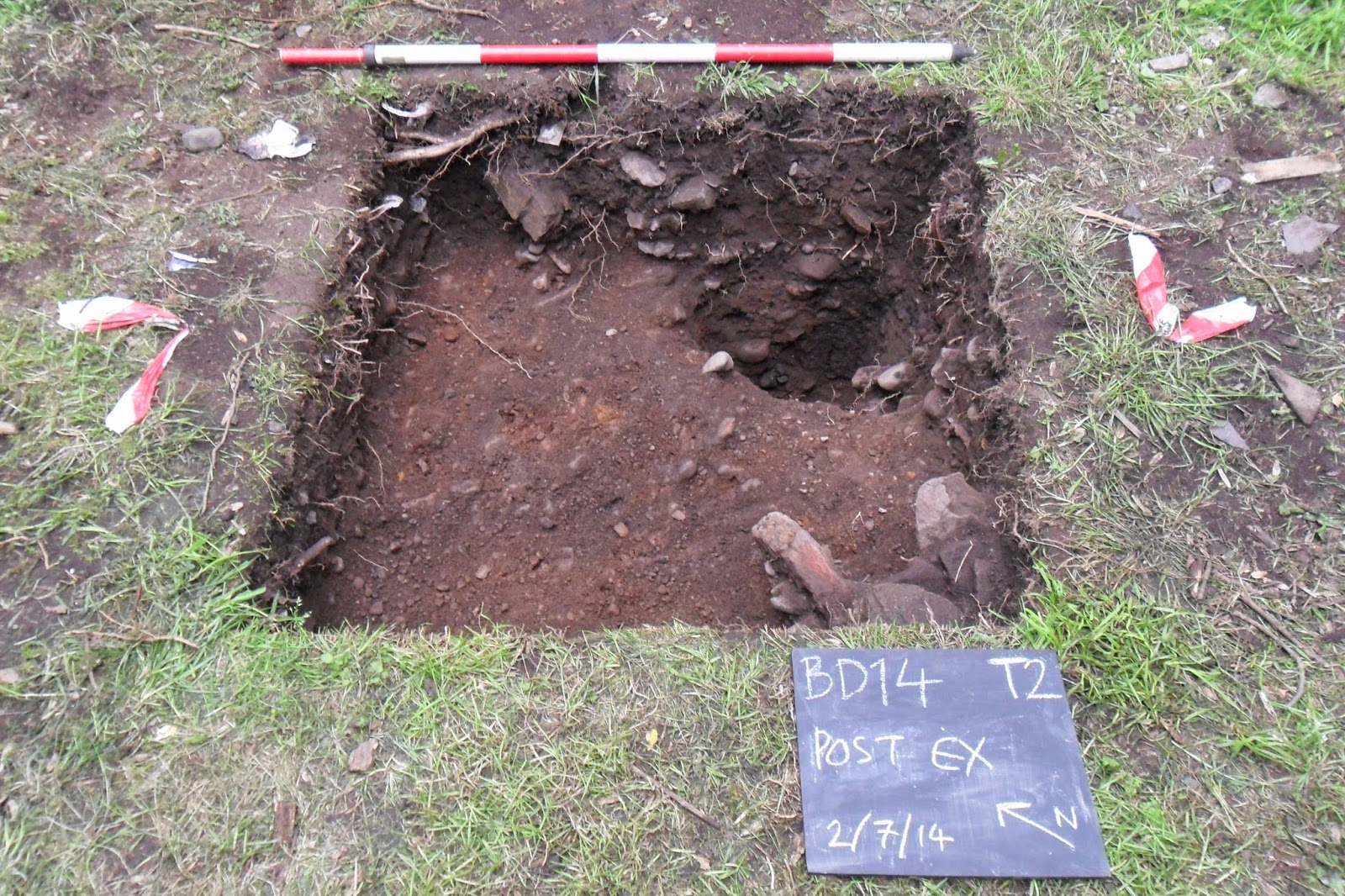 Fiona who is in S3 wrote us a piece for the blog:

"I think that the Archaeological dig was very interesting since we found so many fascinating artefacts that were just right behind my house. The students and the supervisors were very good and they explained to me all the techniques that they were using, and if they found something they had to record it down very precisely.  Not only did we find artefacts but we also found structural looking things and it was so exiting finding all the different types of stone features that looked man made. The artefact that i really liked was the chain mail purse because it was incredibly old and it was just in my garden. We found a post hole that was so cool but it is really difficult to find out what it is but i think it may have been a post hole for holding up structures like shelters or something like that. All in all i thought it was a good experience and i look forward to doing more in the future and i thank everyone who was involved!"

Here is a lovely message from Fiona's Mum Lorna:

"Huge thanks from us all at The Crofts. It was fascinating having you and your students working in the garden . The two students Ashleigh and Cat were really lovely and entertaining!
Fiona and I thoroughly enjoyed getting stuck in to the digging and scraping too. It really does bring history to life when you are finding items from the past in your own garden and a brilliant way to get youngsters interested.  The purse was my favourite! I have been told by my mother that my grandmother had one like that." 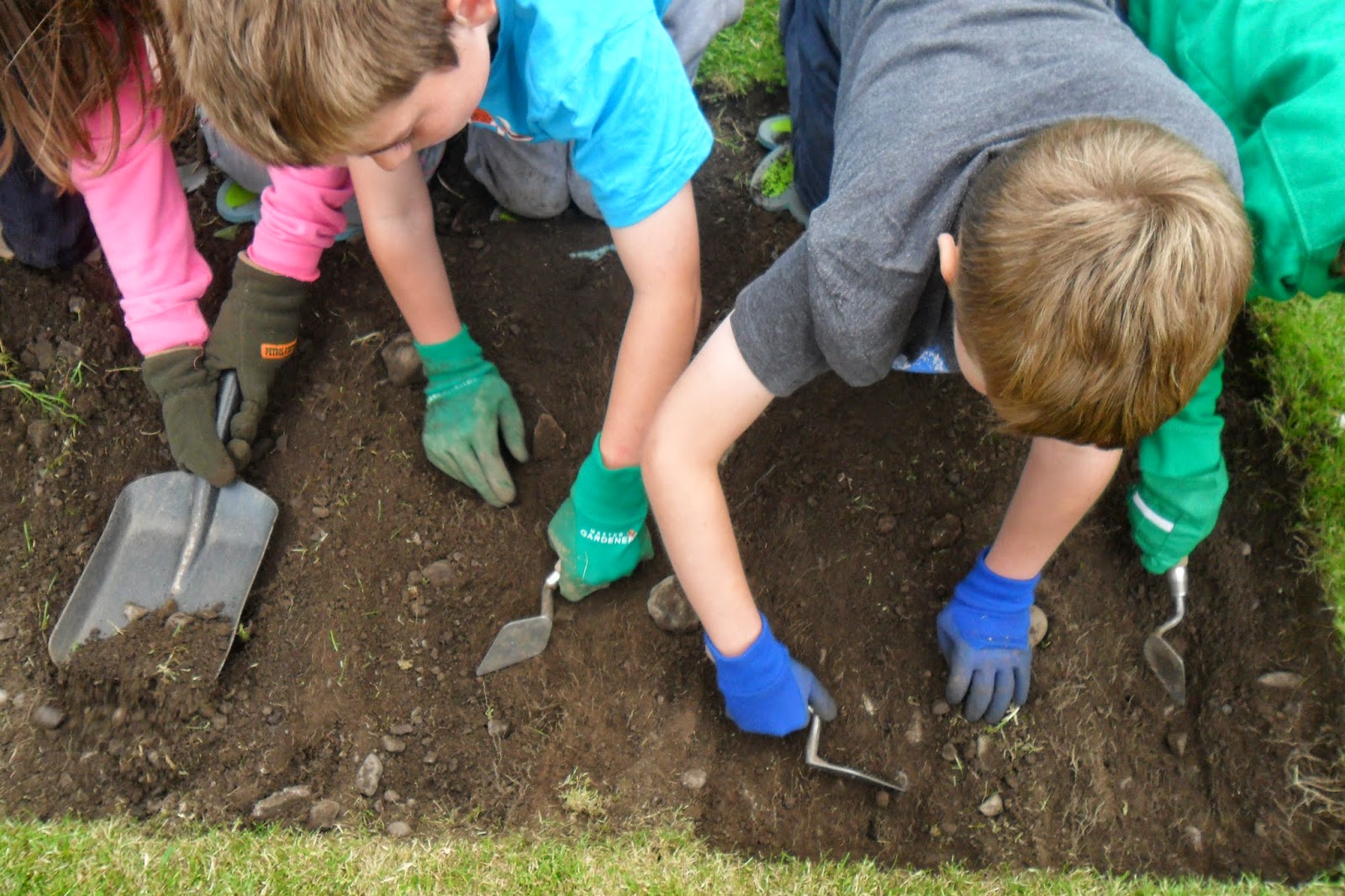 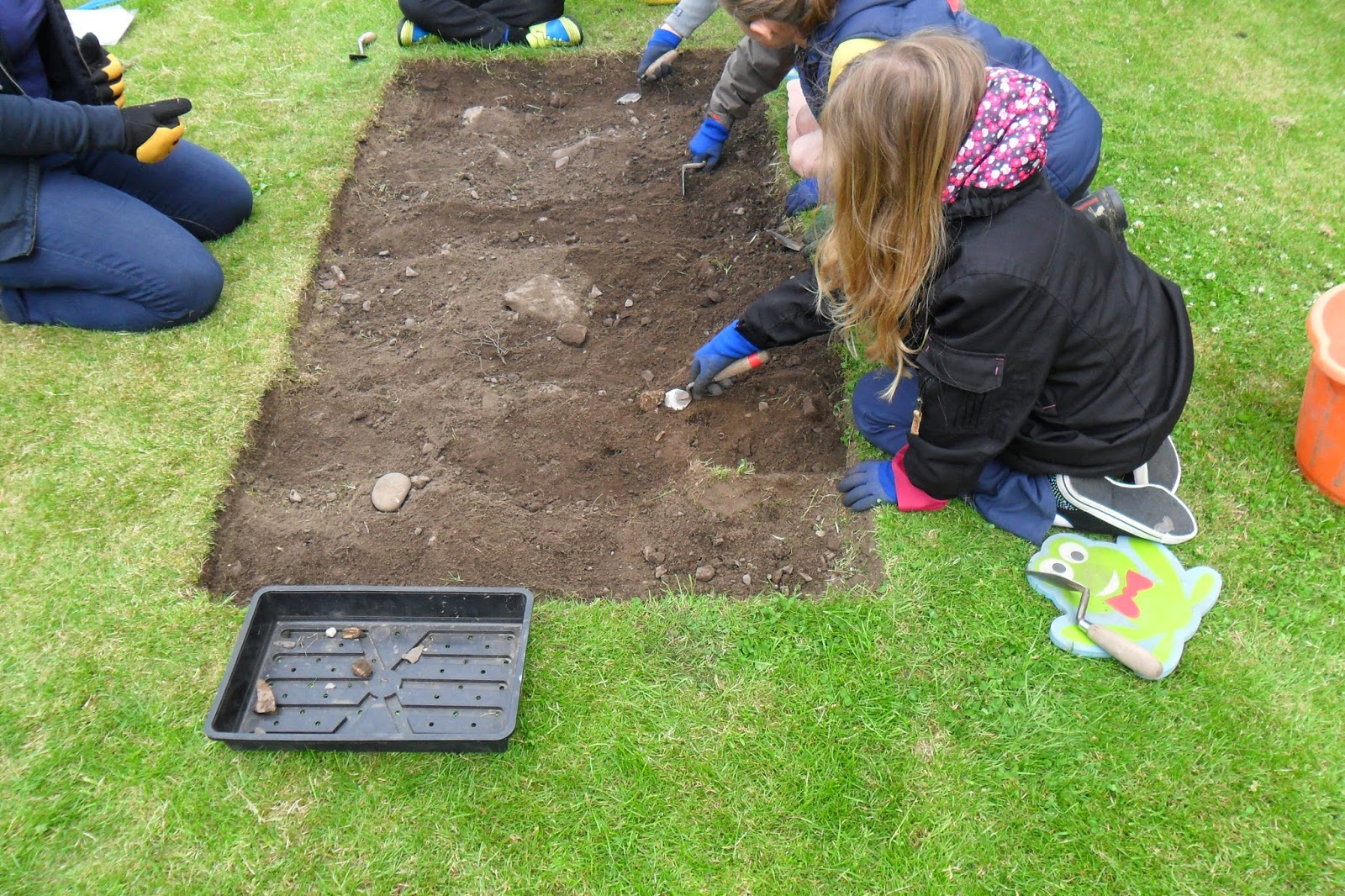 The Big Dig began on 23rd June with a visit to Dunning Primary school.  The P5-7 children discovered many things in front of the old part of their school.  They found 19th Century pottery, sheep's teeth, an iron nail, a piece of brick, some charcoal, and a strange metal & glass droplet!
We spent the end of the week getting our pop-up museum ready.  Thank you so much to all the local volunteers who have offered to help with the shop, given up their gardens and volunteered to learn how to excavate!   The Big Dig wouldn't happen without you!