Trench 5 - enclosure of unknown date....
Hey, this is Chelsea from Glasgow University. I was working on Trench 5a. Today we were cleaning up the site using hoes and shovels. This was to make the features of the site become clearer.  After using the hoes we had to go over what we had done using our trowels. We were able to see the outer henge ditches really well after all the cleaning. This was a lot of hard work but I guess it has to be done! 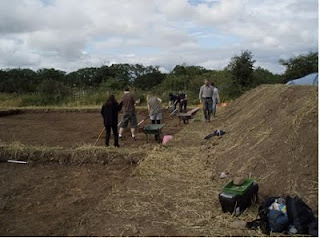 The cleaning line making progress over the trench.

Hey, this is Sandi from Aberdeen University and Trench #6. Today, we spent the first part of the morning cleaning the trenches with hoes and then the rest of the day was spent cleaning the trench all over again with trowels; it was fairly simple if a little back-breaking!  Now that the trench is clear it’s much easier to see the features we have. So far we can see part of a Neolithic henge ditch and what might be a compacted historical road that runs North-South across the trench.  The weather was pretty fair today, if a little breezy which was nice during the hard labour! 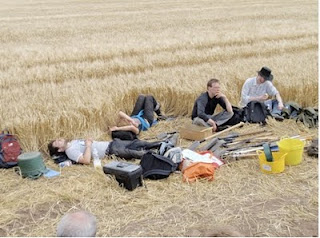 A well deserved rest during lunch.

Hi, my name’s Jim Waugh and I’ve been working in Trench 7. Most of today has been spent on the preparation of the trench; sides being squared, the surface of the trench floor being cleaned by hoes and various features being marked out for further investigation. Among the features that we’ll be looking at in more depth are a series of post holes, thought to deliniate the route of the ancient entry avenue into the site, and various other patches that have caught the interest of the dig managers and supervisors. Although it has been a day of hard graft, the fact that everyone in Cathy’s Commandos worked their socks off meant that, from now on, we can all get on with the archaeological work from tomorrow morning. 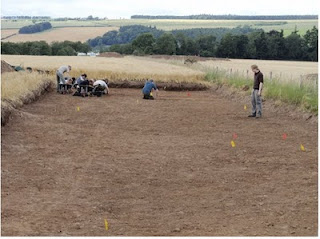 All possible features to be investigated being marked by flags prior to excavation.
Trench 8 - squarish barrows
xDay one on trench eight and morale was high as we proceeded to scrape back the first layers of topsoil to define the existing features with greater clarity and to realise new ones. The identification of adjacent twin Pictish Square Barrows, and possible supplementary burials within the Forteviot cropmark complex provides further possibilities to explore the complex relationships between earlier prehistoric activity and later activities, and to advance our understanding of Pictish burial practices.

Following several hours of backbreaking labour with our good friends the spade and mattock, further trowel work allowed us to clarify the identifiable features within the larger square barrow, with a central burial surrounded by a square ditch. Centuries of ploughing have flattened any protruding structural anomalies that are only just beginning to be revealed.
Under the capable hands of Dr. Ewan Campbell, site supervisor Miss Bain and his crew of motley archaeologists, ranging from the uninitiated and perpetually confused first time field archaeologist (such as myself) to the hardened excavators, work progressed swiftly and confidently.
Following the initial clearing work began exploring several unidentifiable features, ranging from potential post holes outside the main square barrows to the taphonomic influences of previous animal occupants. Excavation began on the ditches defining the outside boundary of the two square barrows revealing their extent and depth. 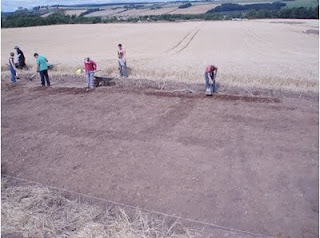 The square barrows are very distinct after cleaning!


Law of Dumbuils
Day 1 at the Law of Dumbuills turned out to be a very productive day.  Arriving on site this morning to find an empty hillfort, no trenches insitu and no porta-loo to be seen eeeek.  I thought I was going to have to bagsy a spot within the trees.  But luckily no, Tessa pulled out a chemical toilet from the back of the landrover and a tent.  We found a lovely spot and the toilet tent is now set up and ready to use, I think it’s still to be christened.
Anyway back to the archaeology.  After  having a look around the hillfort and locating archaeological features we set up a 35.0 by 2.0m trench running North-South across 3 ramparts and 3 ditches.  De-turfing was tough at points as a lot of the grass was like springs and the spades kept bouncing off it, but by 3pm the de-turfing was done and the trowelling began.   The ramparts are well preserved at points and we’re already uncovering a lot of stone.  The hillfort itself is in a great location  amazing views North, East and West with Castle Law situated to the South.  Overall a very productive day and the rain stayed away, which is just as well because we forgot the gazeebo.  Looking forward to what’s in store tomorrow!
Posted by SERFer at 07:24