My name is Paddy Gleeson and I came to Forteviot from University College Cork.
This is the third day here and the second properly excavating. Today I spent most of the day finishing digging my section through the central ditch of one of the Pictish Square barrows in Trench 8. The ditch seems to be the eastern ditch of the larger of the two square barrows but may have functioned as the ditch for the smaller one too though they are not joined in plan. The section didn’t produce anything artefactual; only sandy clay with some large stones towards the centre. After a while I began to get my eye in and finally figured out how to spot the edges and the bottom.
Other than me in the trench, most people seem to be doing the same task, digging sections through the ditches. Fiona, is digging some sort of pit that has produced an animal bone, possibly a rib bone I heard someone say though due to the preservation in the soil here we are guessing it’s modern. The only other find I remember from today is that Fi (quite an expert at sieving) found a charred grain in the fill of her section across the northern ditch of the larger, western square barrow.  The most amusing ‘find’ of the day is definitely Anna’s ‘thumb stone’: a really cool naturally degraded stone that when placed on someone’s thumb appears to look exactly like a gnarly thumb tip. Not archaeological but highly amusing! 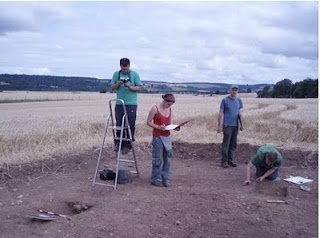 All hard at work recording the sections of the ditches of the smaller barrow.
Trench 6
Hello! I am Calum Macpherson, an undergraduate from Aberdeen University. Today in the trench there was a move from the pure trowelling of yesterday into some rad planning of the grids and the start of excavating some of the features. The day began with a light trowel over several of the grid squares now assigned with colourful names such as John Boy, Liz, Marvin and Mervin. After this we moved on to planning the grid squares by mapping out all of the features shown which for me, involved a lot of staring blankly at a grid square trying to map out the features below. After what seemed like an age we took a photo of the area and broke for lunch. After a break for lunch people started to move onto excavating the features they were assigned. I was assigned an area of charcoal and as yet I havent managed to excavate particularly deeply as soon after i started to excavate it was time to pack up and leave it for another day. 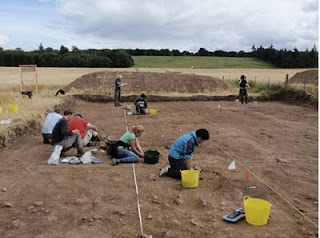 The cleaning continues for some as others behind them begin the pre excavation planning.