The very last of the trowelling back and cleaning was finished up this morning on trench 5. A light rain made for the best photo-shoot we’ve had so far with the double-ditch showing up beautifully on both sides of the baulk. These perfect conditions prevailed for the first few minutes of pre-excavation planning, before the sun unfortunately came out and the soil dried once again to a homogenous grey-brown.
As planning continued, sections of the ditch and surrounds were selected for deeper sondage. The spoil was sieved for artefacts and biological material, a lot of stones resulted.
The large rock protruding in the South-West corner has been stirring interest – cleaning by Dimitra has revealed a base cluster of tightly-packed small stones. There is the possibility that this is a barrow-grave, as discovered in previous years, has been discussed, but only further excavation will tell.
The ditch segments in the baulked-off corner seem to be continuing to a good depth, and our team are getting quite proud of their own little patches. It will be interesting to see whether the ditches are continuous below the gravelly layers, and also what the distinct pits (5008) and (5001) show when they are continued tomorrow. 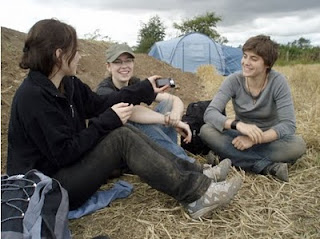 Relaxing during lunch, right before the rain...

Trench 6
Hey all, I am Bambos. Today the weather had once again been kind to us, there were only a couple of rain bursts and plenty of sunshine. When we arrived at trench 6 (where a Neolithic henge, post holes, pits and a number of barrows are presumed to exist) the morning dew that soaked the surface made the features of archaeological interest stand out from the natural deposits. After a quick briefing everyone took their place at their designated posts, and with trowels in hand begun to remove the earth in search for something...that is anything...indicative of past human activity. We were nevertheless not left disappointed when burned bone fragments made their appearance in an area within the henge. With great anticipation their origin and date may become known when analysed within a laboratory environment (hopefully they will prove to be really old and human). Our excitement was even further stimulated with the discovery of two pottery fragments found once again within the henge. On first glance they appear to belong to the Neolithic period (perhaps early to mid).  As you can see this is exciting stuff...I bet  you wished you were here to experience it all. Take care... 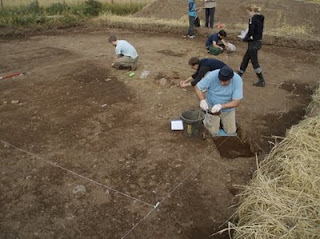 Trench 7
Hi, my name is Elaine Halligan and I’m a student at Glasgow University.   I have been working in trench 7, a Neolithic trench in Forteviot.  This morning when we turned up at the site the features in our trench were a lot clearer  due to the rain last night.  It looks as if there are more than first thought.  We began excavating some of the features after the planning was done, and  I was excavating  feature A, which is either a possible posthole or a tree throw, hopefully it will become clear tomorrow.  There have been no significant finds so far but it has been interesting all the same, hopefully tomorrow!  The other guys on the trench carried on with the planning, and will be ready to start excavating the rest of the features tomorrow, so we should be getting a better idea of what we are working with then.  Luckily the weather has been quite warm today with only the odd shower, and  hopefully it will stay like that for the rest of the week. 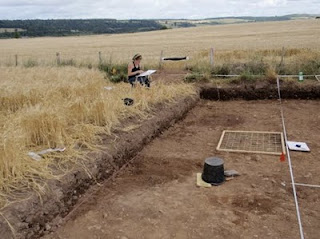 Trench 8
Hi, my name’s Fi. I’m a second year archaeology student from Glasgow University working on Trench 8, the square barrows.  We had great sunny weather for most of the day, which although was lovely to work in dried out the soil in the trench an awful  lot. This meant a lot of near crumbling sections and very little colour differentiation in the soil for us to distinguish and interpret features. Despite this every one managed to get their sections of ditch that they were working on recorded and the trench edges  have all neatened up. We also got the levels and co-ordinates measured for our section drawings as Cathy brought us an EDM theodolite for the afternoon. We even had time for a tidying trowel of the trench surface right before the rain which really made the different contexts stand out. Hopefully tomorrow we can finally start to excavate one of the possible graves!! 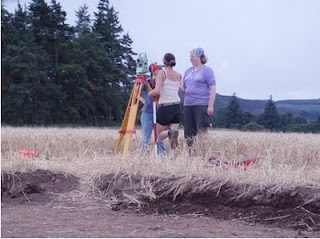