Hey I’m Kirsty and I’m a part of the excavations in Trench 5a. The current main features in the trench I’m working in include: the outer enclosure wall, a few post holes, the inner enclosure and a standing stone as well as  some mysterious other features which we are currently trying to understand.  Today I was working on one of these mysterious features, 5009, which seems to be connected to the outer enclosure wall, but it could be completely unrelated, so we are trying to get to the bottom of this, although this is difficult as the rain resulted in the soil changing colour making it less easy to define. Apart from that we generally finished up the pre excavation plans of the trench and finished reading the levels for those plans. There were some discoveries, a few pieces of modern pottery or china and some large pieces of charcoal, which suggest burning on some features. 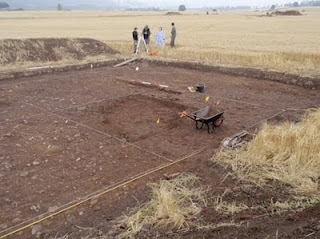 Measuring levels for  the site plan.

Trench 6
Hey, this is Alasdair from Trench no.6. Today the weather has taken a slight turn for the worse, with grey skies and rain showers throughout the day. This made it a rather gruelling task to excavate the features that have revealed themselves over the last few days. Several of the post-hole features in our trench have now expanded in size as we have excavated further, two of which are now believed to be burials. The interpretation of the site is changing all the time, as more and more of the features are uncovered. The team has also began removing soil from a section of the henge ditch, a large ring around 6m in width, in search of an entranceway.
While an entrance is yet to be identified, I made a chance discovery: a small glass bead, which I have been told is likely to date from the Roman Iron Age, made from recycled Roman glass. This was quite exciting, as it one of only two glass finds ever made on the site, the other being a small glass droplet. This has lead to a theory that the material was in fact being made on or near the site. All very exciting, and I’m feeling rather pleased with myself for the discovery of the glass bead! Now I’m just hoping for the weather to start getting better... 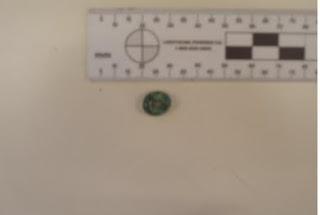 A slightly blurry photo, but it gives you an idea of the scale and colour of the bead.

Trench 7
Lindsay here today! We trowled the next section of the trench that needed to be planned and then set up measuring tapes for plan drawings. Some people drew plans and others dug individual features. All of the features we were digging today were possible post holes. At the moment there are two apparent post holes, both have a center that is composed of dark brown soil which indicated a post pipe. The dark brown soil of the post pipes also have charcoal inclusions, the colour and charcoal inclusions indicate that the post pipes were burned. In one of the post pipes several pieces of burnt red stone were found.  Several pieces of charcoal were also collected for carbon dating which should give us some precise dates for the postholes. 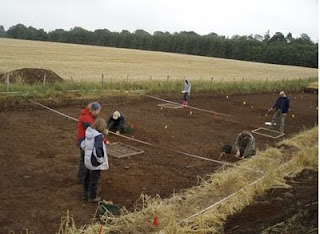 Trench 8
Hi, I’m Anna, a final year student from Glasgow Uni working on the square barrow site. Today was rainy which, although sometimes is a blessing since features can be seen more distinctly, was not today as the constant rain only helped to confuse the outline of the ditch feature with the soil around it. This made trowelling the features more difficult as we were trying not to trowel outside of the ditch. The ditches of the eastern barrow started to be excavated further today. There are three ditches to this barrow, the fourth side being part of the western barrow. The ditches were partly excavated and could perhaps be finished tomorrow. The ditches of the eastern barrow are not very deep. The  site in general is not very deep since the area is on a slight brae of the hill and so has been more affected by ploughing. In the southern ditch of the eastern barrow we found some charcoal which indicates that human activity occurred on the site in the past and will hopefully give us some precise dates for its use. 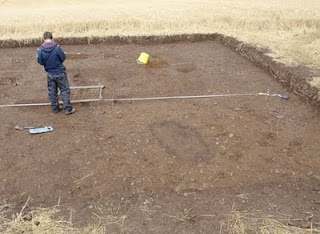