Soil, toil and lots of spoil; the sun sets on another day at Forteviot! I’m Vivienne Barz, from trench 5B, and I’ll be taking you through day six of the SERF Project.
It appears as if all the hard work: clearing, digging, hoeing, trowelling and, of course, bloodletting in the form of pancake-sized hand blisters, is beginning to pay off. Throughout Trench 5, many students have unearthed all sorts of Archaeological treasures, ranging from sizable chunks of charcoal, burnt human and animal  bone  and of course, lots and lots of lovely, datable dirt. I am currently cross sectioning a lovely  charcoal rich pit with one particularly nice large piece which came out today, perfect for scientific dating!! Additionally, the students are learning a plethora of industry information: techniques for topographic survey, standing building survey, and finds recording.
So far, so good! 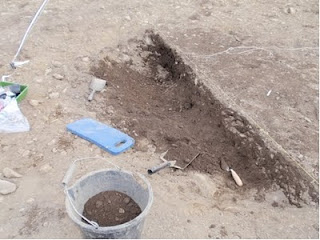 
Hello, I’m Alex, I’ve been working on Trench 6. Interpretation of the contents of this trench is a bit ambiguous, though at the moment we think we are dealing with a Neolithic henge feature, and thanks to a hard days work by some of the volunteers on the surrounding ditch (approximately 6 meters wide!!), we think we may have found a ‘terminal’ confirming that we are not dealing with a bronze age barrow after all (for the moment anyway).
I have spent the day excavating a feature that has turned out to be a post-hole just beyond the outside of the ditch. There have been no significant finds (besides some small charcoal fragments), this is interesting  because this and other parts of the site seem to have been abandoned carefully and cleanly by the final original occupants, possibly a sign of the (sacred?) importance attached to it while it was in use in the ancient past. Most features seem to have been backfilled tidily with the gravelly soil and pebbles, perhaps during the Iron Age or the Medieval period.
However, the day was not completely fruitless in terms of finds: some fragments of bronze age ‘beaker’ pottery emerged from a feature within the henge and what is potentially a bronze or copper pin or buckle came put of the soil nearby. There was also the invention of a remarkable new planning device by Dr Brophy and Dr Noble (patent pending). 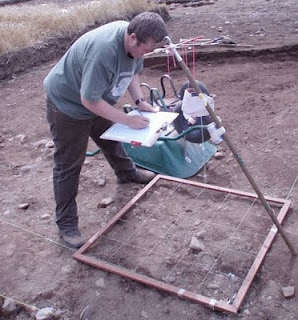 The Planinator: leaning post, plum-bob and tool holder for the archaeologists of tomorrow!
Trench 7
Corinna here today from Glasgow Uni. Today we started off with scraping back part of the trench to clean it up a bit. I managed to find a bit of charcoal by the linear feature, then I did some more trowelling of the same feature, but haven’t found anything so far. The others were digging up their features & some were planning too. For the afternoon me, Lindsey, Elaine & Fiona went to learn about topography. We used EDMs, computerized theodolites to you and me, and they required a lot of complicated setting up as they were pretty fiddly. Me & Fiona weren’t so good at setting it up, but Elaine & Lindsey did it well quick, probably because Lindsey’s done it before. We measured out a plot of land using the prism staff & the machine uses lasers to work out coordinates & angles & heights of land. Had to stand up a lot & try to keep the staff completely straight so the machine could measure out the lines. The weather was good. 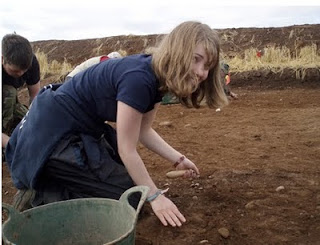 This is a pic of Laura doing some trowelling.
Trench 8
Hi, I’m Fiona, a 2nd year student at Glasgow University working on the Pictish square barrows in Trench 8. An overcast morning saw us continuing excavation of the ditches of both barrows and Fi began excavating a section of the suspected grave within the western barrow. Specific contexts were difficult to define, likely due to repeated plough action, and progress was initially slow but the grave seems to be there as expected.  What may be discovered within it, only time will tell. Lewis began a half section of the very dark feature in the south east of the trench which we suspected may have been a charcoal grave but seems to be a fire-pit, possibly Neolithic, containing a lot of charcoal, charred seed deposits and evidence of in-situ burning. The clouds eventually gave way to intense sunshine after lunch and I bade goodbye to Trench 8 for the afternoon while I was introduced to topographical survey training using the total stations. Utilising heavy and (very) expensive equipment seemed a small price to pay in order to get off my knees for a few hours. It was a lot of fun  but I did miss the digging. Hopefully there will be more information about Trench 8 features and finds when I return tomorrow. 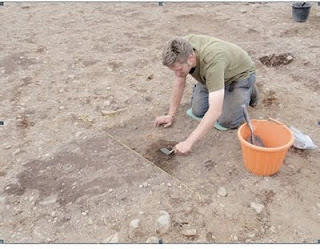 Lewis beginning excavation of the pit with evidence of in-situ burning.
Law Dumbuils
Hi Colette here from Aberdeen University. I’m situated at the hill fort on Law of Dumbuils and today has been fairly eventful. Before we could begin digging today we had to manoeuvre around the herd of sheep in our path, not what you would expect on the daily commute to work. Once on site I returned to the area I had been digging the previous day the south end of ditch 1. Here we have hit bed rock quite close to the surface, and we were trying to see how far down the trench it came at that particular level. After much hard work trowelling and using the matttock we discovered: not very far. Since it wasn’t very pleasant work I luckily got moved down to the clay area at where the ditch is at the lowest point. Here we were investigating whether the clay was potentially over tumble rubble like just a bit further up or if in fact the clay ran underneath the rubble. I scraped away for hours and eventually found what we were looking for, a definitive line of where the clay leads. I discovered that the clay was in fact underneath the tumble rubble. Whilst searching for this I found a stone bashing tool, which may be related to the mortar found earlier by Alex just up from where I was working. Other finds today included burnt bone most likely from sheep and also what looks like a sheep’s shoulder bone, these finds came from the North facing side of rampart 1. After a hard days slog in the muddy trench you just want to get back for your tea, but the journey home was just as eventful as in the morning with sheep in our path, we were lucky this time though as Stuart managed to scare them away ;). 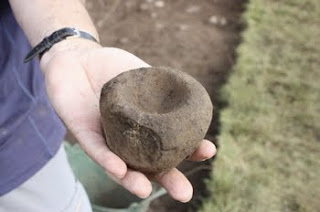